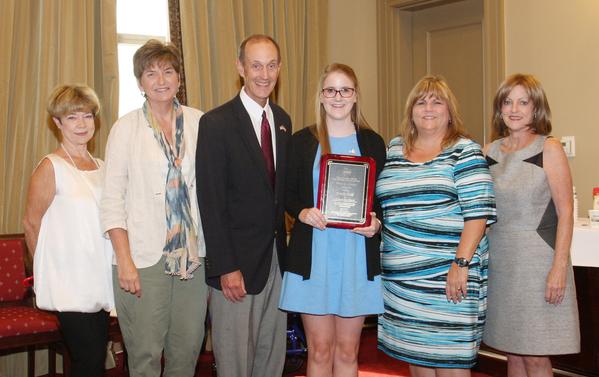 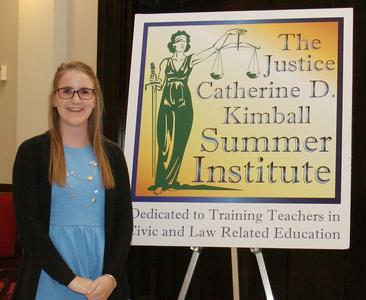 The Louisiana Center for Law and Civic Education’s Civics in Action award recognizes an outstanding middle or high school student who has demonstrated outstanding civic virtue and involvement in his community – a student who exemplifies what it means to be an engaged citizen.

Emily Held, a 2014-15 senior at Haynes Academy for Advanced Studies in Metairie, was nominated for the Civics in Action award by Jamie Staub, her Honors Civics and Honors United States History teacher. “She maintained an A average while being an active, engaged, prepared student. Any teacher would be lucky to have her as a student,” said Staub.

Held’s extra-curricular activities included organizing a charity race for the Eliminate Project, which is a major emphasis for Key Club and Kiwanis International and is designed to eliminate maternal and neonatal tetanus in the world. Her excellent organizing skills and dedication to the project resulted in local Key Club students from many different schools together to raise over $6000.

Held has also volunteered at many kid-oriented activities such as Boo at the Zoo, Kids Zoo to Do and Fun for All Day for Kids Kicking Cancer, where she was involved in games, activities and food. Her favorite project to work for was the Special Persons Picnic at a local church. Every fall and Christmas this church, with the help of volunteers, provide food, dancing and a puppet show for young people.

During her senior year, Held was elected president of the Haynes Academy Student Council and was a member of the team that took the title of We the People: the Citizen and the Constitution State Champion.  Her team went on to compete at the National We the People Competition in Washington D.C., where she argued admirably before a panel of distinguished judges on rights protected by the Bill of Rights.

It is with great pleasure that the Louisiana Center for Law and Civic Education names Emily Held the 2014-15 recipient of the prestigious Civics in Action Award.